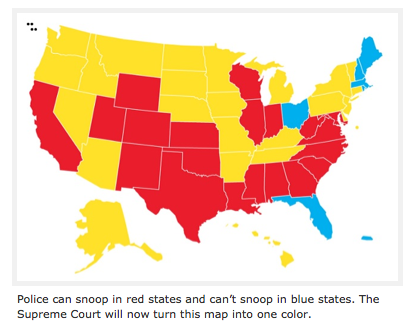 The Supreme Court will take the next step in applying traditional notions of privacy to emerging advances in technology, announcing Friday it will consider whether police need a warrant to search the contents of a cellphone they seize when making an arrest.

Government officials contend cellphones are no different than other items that the court over the years has said police may search when they find them on the individuals they arrest.

But defendants and privacy groups say modern cellphones contain a wealth of information that traditionally has been off-limits. In one of the cases the court accepted, a federal appeals judge said they contain a vast array of information that traditionally has been kept in the home: “photographs, videos, written and audio messages (text, email and voicemail), contacts, calendar appointments, web search and browsing history, purchases and financial and medical records.”

In trying to apply Supreme Court precedents about the constitutional protection from unreasonable searches to modern technology, lower courts are deeply split.

“At least six courts hold that the Fourth Amendment permits such searches, while at least three others hold that it does not,” wrote Jeffrey L. Fisher, a Stanford law professor representing a California man who successfully sought the court’s review.

Coming on a day when President Obama addressed concerns about the government’s ability to gather massive amounts of surveillance data, the court’s announcement underscored how technological advances are causing the justices to look anew at issues.

The court decided last year that technology made it easier — and thus, usually made it required — for police to obtain warrants to test the blood of suspected drunken drivers. And it went a long way toward endorsing DNA sampling as the modern-day equivalent of fingerprinting.

Lower courts are still struggling with other questions, such as whether the government needs a warrant to obtain cellphone location data from telecommunications carriers.

But searches of cellphones found on those arrested already has split the country.

In general, warrants are required for searches, but the Supreme Court has said there are numerous exceptions, particularly after arrests, when police are protecting themselves and others by looking for weapons or securing evidence that might be destroyed.

In past cases, searches of wallets, pagers, address books and even cigarette packages have been deemed acceptable.

But a panel of the U.S. Court of Appeals for the 1st Circuit in Boston said cellphones were different. The judges were considering the case of Brima Wurie, who was picked up on suspicion of selling crack cocaine in 2007. While he was in police custody, his flip phone kept getting calls from a number identified as “my house.”

Using the telephone number and a reverse directory, the police located his address, got a warrant to search his home and found crack, marijuana and a weapon.

In a 2-to-1 decision, the appeals panel threw out the evidence against Wurie. The majority endorsed a rule that said warrantless cellphone data searches are “categorically unlawful” given the “government’s failure to demonstrate that they are ever necessary to promote officer safety or prevent the destruction of evidence.”

The other case the Supreme Court accepted is from California, where judges went the other way. The California Supreme Court has said that police may search a cellphone — even some time after the arrest, at the station — when the phone is “immediately associated with [the arrestee’s] person.”

That was bad news for David Leon Riley, who was pulled over in 2009 by a San Diego police officer for an expired registration. Police quickly discovered that Riley’s license was suspended and later found guns under the car’s hood.

Police also examined his Samsung phone and found language that led them to believe Riley had gang ties. A photograph on the phone tied him to a car that police said had been used to flee a shooting.

Riley was indicted for murder and other charges, convicted and sentenced to a term of more than 15 years in prison.

The court will hear oral arguments in the two cases, Riley v. California and U.S. v. Wurie, in April.