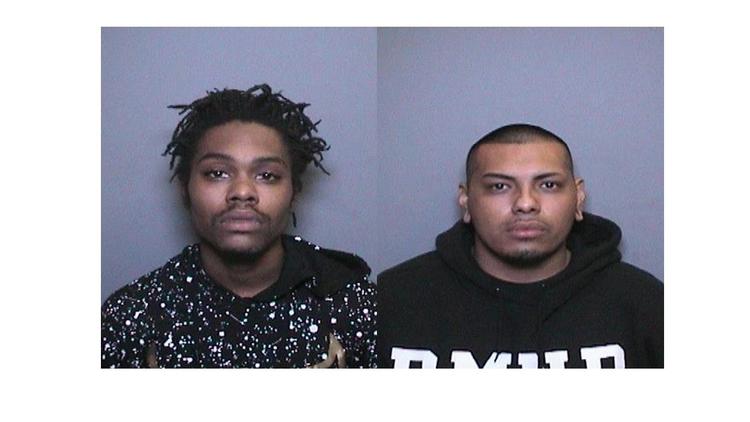 Willie James Clark, 21, left, of Rowland Heights and Brian Vega Salinas, 20, of La Puente were arrested in connection with a burglary at a Tustin pharmacy, police said. (Tustin Police Department)

The suspects had no idea that the bottle of cough syrup perched on a shelf at a Tustin pharmacy contained something more than cough relief.

It wasn’t until the nondescript package was removed from the small Newport Avenue business by burglars that its secret ingredients went to work.

Concealed inside the bottle of cough syrup was a GPS device that began tracking the medicine thieves’ every move, according to police investigators.

Tustin police spokesman Lt. Robert Wright said investigators decided to drop the small piece of technology into a bottle of cough syrup after a half-dozen pharmacy burglaries this year.

Before planting the tracker, a department crime analyst examined the days, times and neighborhoods where pharmacy burglaries had occurred for possible patterns. He then determined a likely target: the Creative Compounding Pharmacy in the 13000 block of Newport.

Investigators got permission from owner Denise Taylor to plant the tracker, which functions like the Find my iPhone app, Wright said.

Taylor had the misfortune of being burglarized in 2012 — a year after her pharmacy opened — but the thieves were never apprehended, although they were captured on video surveillance. Maybe the next time would be different, she figured.

The cough syrup with the GPS tracker sat on a shelf for several months before it was grabbed in last month’s break-in.

“It paid off,” Taylor said.

This was the first time Tustin police successfully used a tracking device in pharmaceuticals. The technology has also been used on bicycles, delivery packages and one automobile. The car experiment didn’t work so well, however, because nobody took the bait.

“I don’t think they liked the car,” Wright said.

In all, more than 100 suspected thieves have been nabbed with the department’s use of GPS devices.

“The technology allows us to secrete the system in a variety of items and is only limited by our imagination,” the Police Department said in a statement. “We will continue using this technology as we want every criminal who is considering stealing something in our city to wonder if a GPS device is hidden inside.”