In the hands of criminals, small drones could be a menace. Now is the time to think about how to detect them and knock them down safely 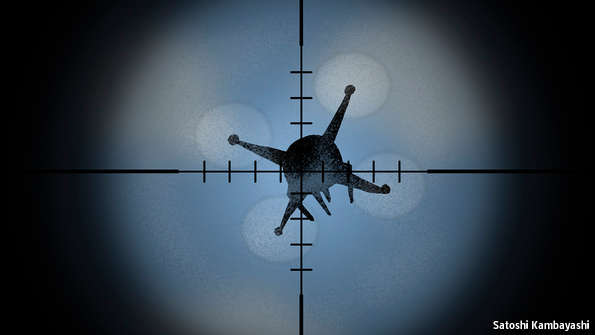 ON APRIL 22nd a drone carrying radioactive sand landed on the roof of the Japanese prime minister’s office in Tokyo. It was the latest of a string of incidents around the world involving small drones. Last year more than a dozen French nuclear plants were buzzed by them. In January one crashed on the White House lawn. In February and early March several were spotted hovering near the Eiffel tower and other Parisian landmarks. Later in March someone attempted to fly one full of drugs (and also a screwdriver and a mobile phone) into a British prison. The employment of drones for nefarious, or potentially nefarious, purposes thus seems to have begun in earnest. It is only a matter of time before somebody attempts to use a drone, perhaps carrying an explosive payload, to cause serious damage or injury. The question for the authorities is how to try to stop this happening.

The French government is already taking the issue seriously. In March, it held trials of anti-drone “detect and defeat” systems. These trials used two sorts of drone as targets. One was fixed-wing aeroplanes with a wingspan of up to two metres. The other sort was quadcopters—miniature helicopters that have four sets of rotors, one at each corner, for stability. The results have yet to be reported.

Detecting a small drone is not easy. Such drones are slow-moving and often low-flying, which makes it awkward for radar to pick them up, especially in the clutter of a busy urban environment. “Defeating” a detected drone is similarly fraught with difficulty. You might be able to jam its control signals, to direct another drone to catch or ram it, or to trace its control signals to find its operator and then “defeat” him instead. But all of this would need to take place, as far as possible, without disrupting local Wi-Fi systems (drones are often controlled by Wi-Fi), and it would certainly have to avoid any risk of injuring innocent bystanders.

One company which thinks itself up to fulfilling the detection part of the process is DroneShield, in Washington, DC. This firm was founded by John Franklin and Brian Hearing after Mr Franklin crashed a drone he was flying into his neighbours’ garden by accident, without them noticing. He realised then how easily drones could be used to invade people’s privacy and how much demand there might be for a system that could warn of their approach.

DroneShield’s system is centred on a sophisticated listening device that is able to detect, identify and locate an incoming drone based on the sound it makes. The system runs every sound it hears through a sonic “library”, which contains all the noises that are made by different types of drone. If it finds a match, it passes the detected drone’s identity and bearing to a human operator, who can then take whatever action is appropriate.

Other ways of detecting drones are also under investigation. Despite the shortcomings of radar, Blighter Surveillance Systems, based near Cambridge, Britain, is having a go. Conventional radars, which search for things by looking for shifts of position, are not good at spotting slow-moving objects like drones. Blighter’s approach, based on a radar developed to spot human intruders who are crawling along the ground to evade detection, employs the Doppler effect instead. It can tell how fast, and in which direction, something is moving by comparing the frequency of the radar beam it emits with that of any reflection it receives. The Doppler effect means the beam’s frequency rises when it bounces off an approaching object and falls when it returns from a receding one. Once the radar notices something moving, it passes the information to a human operator who can take a look with a camera or (if it is night time) a thermal-imaging device, to determine whether the object is a drone or a bird.

Detecting an incoming drone, then, seems possible. But that does not solve the problem of what to do when you find one. You could try to jam its controls in any of several ways. A crude but effective one is to flood the radio frequency the drone is operating on—or even the entire radio spectrum—with a signal of high enough power to cancel out the drone’s control signal and cause it to crash. Such a crash, though, would be uncontrolled and so might result in damage or injury. Moreover, a spectrum-wide jamming signal could do a lot of other harm.

A more sophisticated approach, drone spoofing, involves the spoofer sending fake GPS signals specifically to the drone. If these are more powerful than the real thing, they can be used to feed false navigation information to the drone’s computer, causing the craft to change course or crash in a place of the spoofer’s choice. Surprisingly, no one seems to be developing this commercially as a drone defence (at least, no one is admitting publicly to doing so).

An even cleverer idea is to hijack not just a drone’s navigation but its entire control system. One person working on this is Samy Kamkar, a security researcher famous in computer-hacking circles for devising, in 2005, the fastest-spreading worm program of all time (within 20 hours of its release it had inserted the text “but most of all, samy is my hero” into the MySpace profile pages of 1m people). SkyJack, the result of Mr Kamkar’s drone-related deliberations, subverts the controls of one of the most popular sorts of drone, the Parrot quadcopter, of which more than 700,000 have been sold.

SkyJack is itself a drone. It is a Parrot modified by the addition of a specially programmed Raspberry Pi (a commonly available miniature computer), a battery and two wireless transmitters. It seeks the signals of any other Parrot in the neighbourhood and hijacks that drone’s wireless connection by issuing a command to disconnect from the device controlling it. This creates what Mr Kamkar calls a zombie drone. The hijacker can then fly the zombie wherever he wishes, and also watch its video feed.

If a target drone’s controls prove unsubvertible, though, it may be necessary to apply brute force. A shotgun or a rifle can be effective against a drone (indeed, the richer sort of sports shooters are starting to use drones as an alternative to clay pigeons). But shooting drones down, or knocking them out of the sky with interceptor “killer drones” (which has also been tried) comes up, once more, against the problem that you do not know where a disabled drone is going to land. 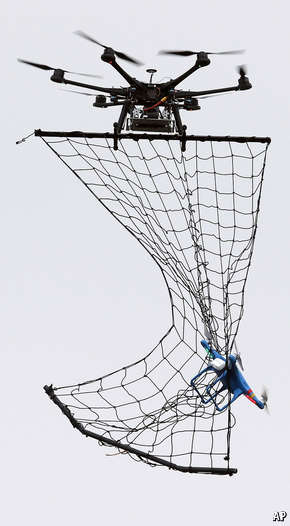 An alternative is to try to catch and retrieve the target. That is the approach adopted by Malou Tech, a Parisian firm. Malou’s hexacopter, the MP200, can be fitted with a dangling net that entangles its prey (see photograph) and brings it back for examination. Doing this requires a skilful ground controller, but Malou has set up a drone school to train people in the art.

Even better, though, would be to retrieve the human operator behind a drone—and that is what ECA Robotics, in Toulon, is trying to do. Once its drone, the IT180, has located a rogue device, transponders on it can track the intruder’s control signal back to a source up to 700 metres away, which the drone then photographs. This means that even if the operator is able to make a getaway, there will still be evidence that may identify him and which can be used in court if he is prosecuted.

Whether any or all of these ideas will prove good enough to set up real air defences against drones remains to be seen. But the only other approach on offer at the moment is to create areas of restricted airspace around obvious targets and require manufacturers to incorporate them into the software of commercial drones as prohibited GPS locations. That hardly seems likely to deter a determined adversary. So far, prison-smuggling aside, the irregular use of drones seems to have been intended mainly to carry out slightly anarchic protests. Sooner or later a drone will be used for something more sinister.